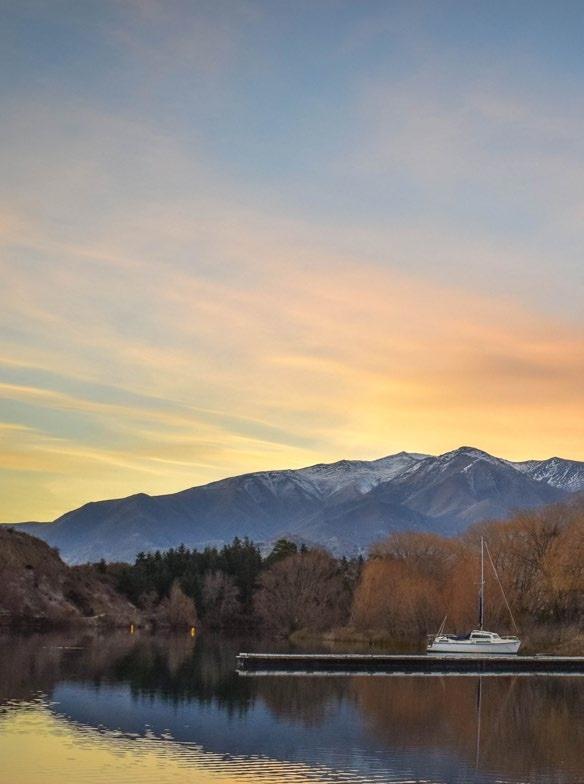 Flanked by the cool south Pacific Ocean to the east and the high peaks of the Southern Alps to the west, the Waitaki River is one of New Zealand’s largest, draining the waters of our highest Mountain Aoraki-Mount Cook.

Climate
1,817 hours of average annual sunshine. 541 millimeters of average annual rainfall. While Waitaki Valley has a distinctly cool climate, its relatively warm summers and long, dry autumns help extend the region’s growing season. Grapes ripen slowly, enhancing both aromatic intensity and varietal character while retaining high levels of natural acidity. Frost is an ever-present risk at either end of the growing season, but being tucked within the Southern Alp’s rain shadow means the very dry climate reduces disease pressure and allows production of a wide range of styles.
Soil
The Waitaki Valley essentially forms a geographical link between Central Otago and the South Island’s eastern coast, the legacy of a long, braided river system snaking down from the Southern Alps to the sea. Waitaki means ‘weeping water’ in Maori, and the wider area provides some 65% of New Zealand hydroelectric storage. A defining feature of the region is its limestone, courtesy of an ancient geological fault line pushing a 38 million year old seabed up alongside the river, leaving a limestone-rich north-facing slope where keen-eyed viticulturists and winemakers recognized its present day potential. Limestone is a relatively uncommon rock type in New Zealand, but the Waitaki Valley’s surrounding area has been famous since colonial times for its ‘Oamaru whitestone’, a highly prized building material responsible for some of Otago and Canterbury’s most beautiful and enduring buildings. This unique feature is also seen in the Waitaki’s distinctive limestone formations, the Elephant Rocks, just one of the impressive geological features of the wider region that includes shark-toothed dolphin fossils, the stunning Clay Cliffs and remarkable Moeraki Boulders, all of which visitors can enjoy exploring via the Vanished World Trail. The region’s bedrock soils have been subjected to the ebb and flows of both glaciers and rivers across the millennia and the vineyards in the Waitaki Valley are typically planted on wither the weathered limestone slopes, or the free-draining greywacke/schist/limestone river gravels of former riverbeds. These very stony soils have an important heat retaining capacity, and reflect back not only heat but also sunlight, important in a cool winegrowing region that does not have especially high sunshine hours.
Primary varieties
40% Pinot Noir, 29% Pinot Gris, 12% Riesling, 10% Chardonnay

The North Otago subregion of Waitaki Valley has created a buzz far in excess of its tiny size. With vines first planted in 2001, it’s a relative newcomer to viticulture but the complex limestone/greywacke/schist soils and very cool climate with a long, dry growing season has attracted the passions of a handful of adventurous and focused producers. Located approximately 20km inland from the mouth of the Waitaki River on the North Otago/South Canterbury boundary, the Waitaki Valley is similar in varieties and wine styles to its nearby winegrowing neighbour, Central Otago, but the subtle differences in climate and soils give a distinctly different personality to Waitaki Valley’s wines.

Expect to find highly aromatic, delicately structured wines with notable but balanced acidity and very pure, expressive varietal character. Pinot Noir is the predominant variety planted, alongside aromatic whites Pinot Gris, Riesling and Gewürztraminer plus a smattering of Chardonnay and other white varieties, this is winegrowing on the edge - there is little margin for error and carefully chosen vineyard sites and low cropping is essential. However Waitaki Valley wines have excited those lucky enough to find them, and it is clearly a region to watch as its potential unfolds.