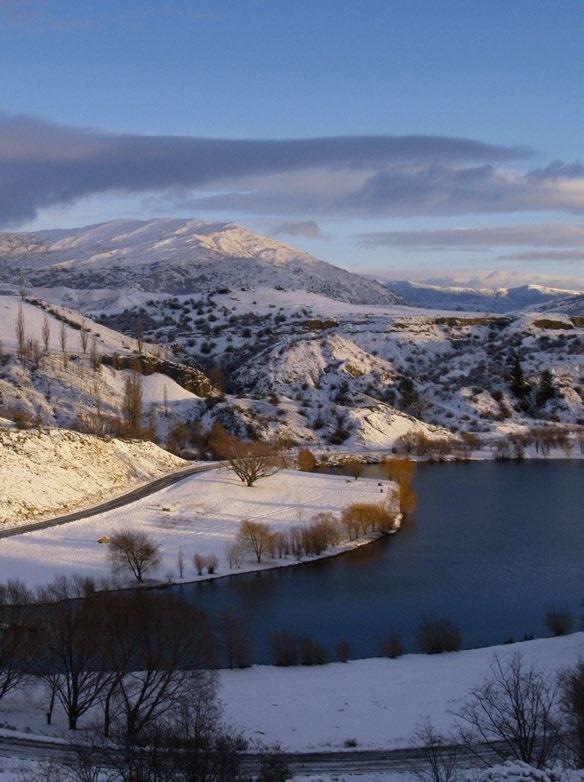 A spectacular landscape and sophisticated tourist culture also home to some of the world’s best Pinot Noir, not to mention impressive, vivid white wines.

Climate
1,921 hours of average annual sunshine in Queenstown. 913 millimeters of average annual rainfall in Queenstown. 2,025 hours of average annual sunshine in Alexandra. 360 millimeters of average annual rainfall in Alexandra. The world’s southernmost wine region and the country’s highest, in this semi-continental climate frosts are an accepted and planned for hazard, however the marked diurnal variation, high sunshine and short, hot summers provide an eloquent, if brutal, landscape for vines: site selection is everything. Dry autumns and overall low humidity are significant assets, helping to coax both amazing purity and complexity.
Soil
A region shaped by glaciers and now defined by lakes, rivers and strong weather has resulted in a wide range of soils across the various sub-regions, comprising broken schist, clay, silt loams, gravels, windblown sands and loess and even gold mining sluicings. The common thread is good water drainage as the majority have stony subsoils, with schist or greywacke bedrock.
Gibbston
Situated east of Queenstown along the spectacular Kawarau Gorge, Gibbston hasn’t looked back since the first commercial bottling in 1987. The highest sub-region, its cooler climate and north-facing hillside vines ripen later than neighbouring subregions, giving lighter though still intense wines.
Bannockburn
On the south bank of the Kawarau River at the southern terminus of the Cromwell valley, the vineyards occupy one of the warmest, driest sites in the region (harvest can be up to a month ahead of Gibbston) producing highly distinctive and complex wines.
Cromwell, Lowburn & Pisa
This area is located on the western side of Lake Dunstan stretching north for some 25km from the township of Cromwell. The majority of plantings are situated on the lower terraces and valley floor running parallel to the snow-capped Pisa mountain range producing silky seductive wines.
Bendigo
Northeast of Cromwell, Bendigo is possibly the warmest of all the subregions with vines planted on gentle north facing slopes. Wide-scale plantings (in the context of the region) on stony soils are capturing the extreme climate’s hot summer sun and cold clear nights.
Wanaka
This subregion, lying 80km and a couple of mountain ranges north of Queenstown, boasts one of the world’s most picturesque vineyards. Cooler and slightly wetter than the Queenstown/Cromwell areas, beautiful Lake Wanaka provides welcome reflected radiation and mitigates frosts producing delicate and vivid wines.
Alexandra
Feraud’s 1864 plantings were here, and his stone winery still stands within its spectacular schist landscapes. The most southerly subregion, the climate is dry and runs to extremes in both summer and winter but the marked diurnal variation right up to harvest gives vividly varietal, aromatic, finely structured wines.
Primary varieties
81% Pinot Noir, 8% Pinot Gris, 4% Chardonnay, 3% Riesling, 2% Sauvignon Blanc

A spectacular landscape and sophisticated tourist culture also home to some of the world’s best Pinot Noir, not to mention impressive, vivid white wines.

Historically noted as ‘pre-eminently suitable’ for winemaking (Bragato, 1895); indeed, the region’s first Gold Medal was for ‘Burgundy’ in Sydney in 1881, from vines planted in 1864 by Frenchman Jean Feraud. However, stonefruit prevailed until renewed interest in the 1950s and then significant commitment by the 1970s pioneers, whose efforts endure today in names such as Chard Farm, Rippon, Black Ridge and Gibbston Valley.

The main subregions lie within close reach but the distinctive mountainous terrain means each occupies a unique niche of climate, aspect and altitude. Soils can vary considerably within each subregion though a stony free-draining base is common to all.

The remarkable landscape of soaring snow-capped mountains and glittering rivers deep within ravines (this was gold rush territory in the 1800s) draws visitors from far and wide who are invariably further captivated by the excellent cellar door facilities and wine-focused tourism opportunities.